Here’s what some of our customers have to say about us. 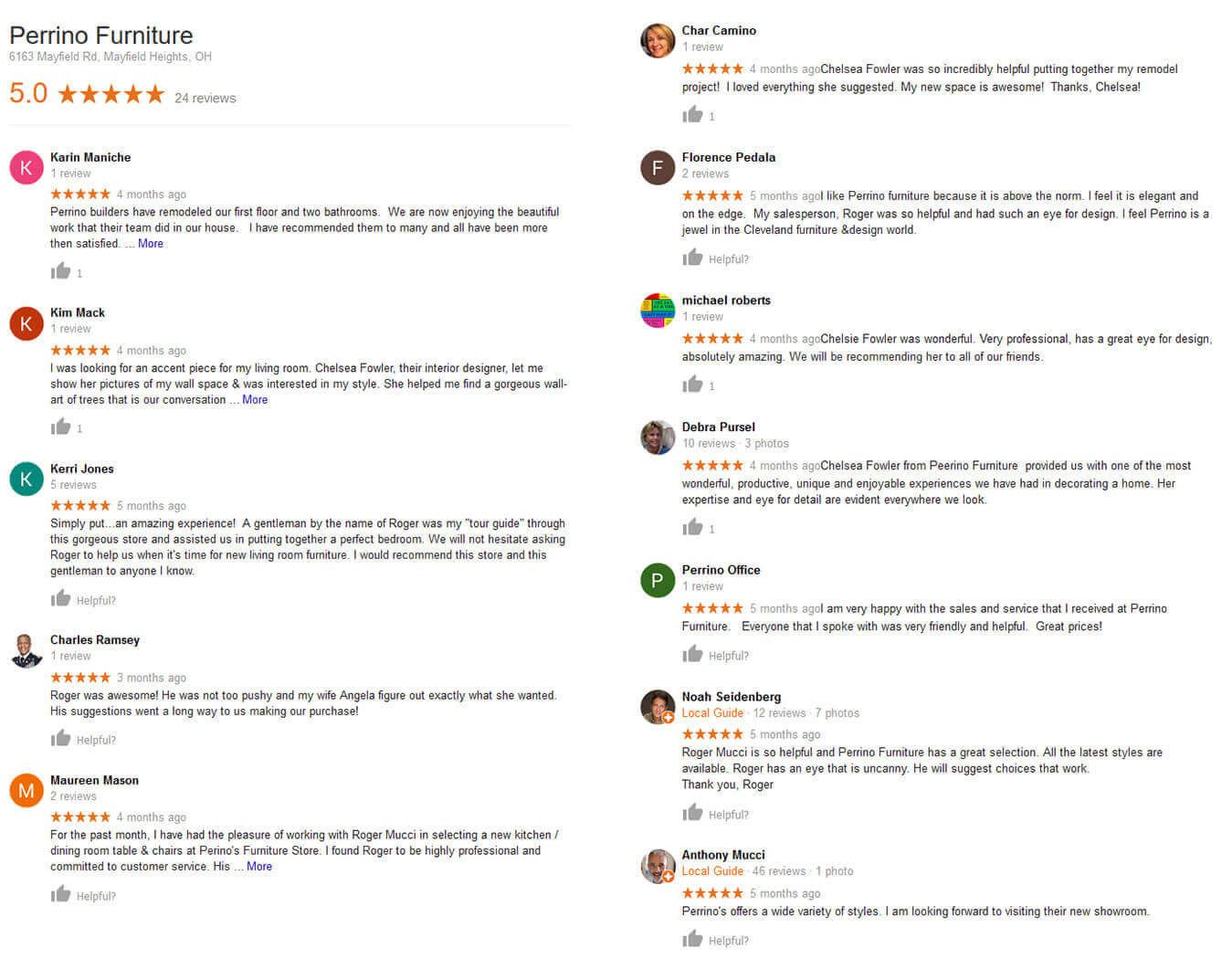 Perrino Furniture has earned 5 stars from me!

"Back in February, when they were having a moving clearance sale, I purchased a custom designed couch. 9 Weeks later I was informed that it was finished and we schedule a delivery for Friday April 13th. Now I don't know if it was bad luck or what but the delivery guys just couldn't get the couch in the house. Every angle backed into a window or wall of the hallway and the height was too much for the door frame (this was after measuring and all). While I was upset I do want to mention that the delivery guys were very professional and polite. I called and met with the manager that same day to resolve this issue. In all honesty I had every intention of cancelling the order for my money back because I didn't want to wait for another couch to be delivered. But the manager walked me around their new store, showing me both floor models and a few in the back. I cam across this very nice gray couch with great support and design. Despite being 6 inches shorter and about 5 inches thinner, this couch was a better model from a superior manufacturer (I did some research to confirm). The manager worked out a deal that worked in my favor. I am very appreciative of the honest and sincere gesture that was made. While this issue was not anyone's "Fault" the manager set out to make it right. Now the best part is that they snapped their fingers and got the couched delivered that next Friday (the 20th)! I had a dinner party that evening and it was perfect to have my new couch in the house!
Perrino Furniture will be having a grand opening in May/June of 2018. I highly recommend going to look around. While pricing and negotiating may not be everyone's forte, I can assure you that these people work with you. Their new facility is immense compared to the other and has a plethora of items! I honestly saw two or three items that I am planning to go back for.
A sincere thank you to Perrino Furniture for rectifying the situation in a way that left them money in hand and me a very satisfied consumer." Thank you, Samuel Smith

Members Always Get More!
Some areas of our site are limited to members only.

Tell Us About Yourself

We're proud to be a small, local business and we want to get to know our customers.

We appreciate it! Please don't hesitate to contact us if you have any questions.